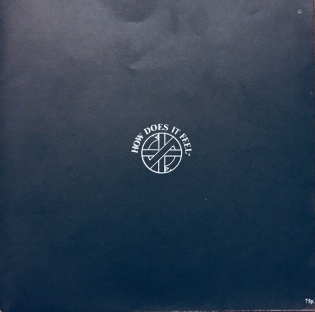 My Featured 45 for today is Crass’s, How Does it Feel. Crass is by no means for everyone, but they sure could get their messages across. They always had great cover art and posters from their singles.

In 1982, I was a punky 17 year old on my first trip to the UK. I was vagabonding for a month on my own. I was desperate to see where all my favorite punk bands had been and what influenced them, even if it was just to stand in the same city, hop record shops, and try to get to a show. I had to experience Carnaby Street, Camden Market, Portobello Road, and of course I had to travel and hit up other towns in the UK. I learned that each city had it’s own music scene after talking to local kids, each with it’s own flavor. I liked Joy Division, so off to Manchester I went. I then had to visit with some pen pals. So after that it was Wales.

I’ll never forget visiting with my pen pal. Ah, that ancient teenage custom of meeting people from around the world, before there was Twitter and Snap Chat. You dug around in the back of music Fanzines from the UK, the ones you might find in the import section at the record shop. You found names of people who liked the same groups you did. Hand wrote a letter, said “Hello, I found your name and you like some of the same bands I do. It’s hard to find this music here, I listen to college radio to get it. I’ll tell you about California Punk and Rockabilly, or Goth.” And so weird transatlantic bonds were formed. I would of course learn that not everyone you wrote to was how they presented themselves. That’s another story for another time.

A Discotheque in York

I was in Wales, that ancient city with Roman bits still strewn about it. My pen friend and I went down to the local all ages discotheque, me in all my crazy bizarre finery from the markets in London. Yeah, half my clothes got lifted at a youth hostel. London lesson. At least they didn’t get all the 45s I had picked up you couldn’t get back home. We sat in the disco, she with her Shandy, me with a Pernod and Ribena. Two lads started trying to get our attention. This was new territory for me. Boys didn’t give me the time of day at school or in California in general. The Gingery thing. So I let my pen friend handle it, they were Welsh and I figured I wouldn’t get it. But one wasn’t speaking Welsh, and he was in a soldier uniform. I picked up the accent finally. A Liverpool man. I had just gone through on the one day trip there. But he was speaking in tongues I didn’t get, very intensely. Finally his mate, probably seeing the utter bewilderment, and reminding his friend there was an American, tell me in my ear, “Don’t mind him so much. He’s just been through the Falklands business. He’s still not with us yet.” It was the short, fierce little war between Argentina and the British.

I had been hearing of the Crisis through my travels. I had heard something before I left home, and wanted to find out more. But this was the days of no Internet, and American filtered news, even more filtered than now. It was Ronnie Reagan and Thatcher. All about control. The conflict took place the April before I arrived, and cemented Thatcher for upcoming elections. The whole conflict was a mystery to me, and many tried to explain it to me, many of them older and very British. But the punk rock contingency was having none of it, and protests of the violence were being sung about in the music that was released that summer and fall.

I tried to be patient and sadly the young soldier with drink got far worse, and my friend and I had to make our escape. After that night, I felt terrible that such a young man had to go through such violence, and live with the people who had died because of the actions on both sides. I was determined to find out more about the punk scene in other cities. I had been told to try Edinburgh, and hunt record shops there. Maybe even get into a club. So next day, after dealing with Welsh friend’s bizarre Mum, I boarded a train for Scotland. 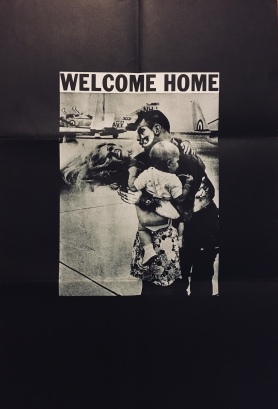 Inside poster art. Crass isn’t for everyone but they got the message across.

After surviving the strange heat wave that had hit London a week before, I was warned to prepare for Scottish Summer. On the train I would find out what that was. I was scrabbling about lugging the case, my boots and short skirt, my punky self. Slipping and sliding on the wet floors. Trying to avoid all the leering men I kept encountering. Learning life’s mysteries of older men hunting young 17 year old girls. Definitely not something you tell Ma about when you get back. I  finally found a car with mostly women in it. Everyone was going about the weather. In those days, no WiFi to check the actual weather. But as we got closer to Scotland, you could see the bendy trees and debris flying about. Clouds dark as night. The train got thumped by gale force winds. Finally at the border, there was an announcement. All trains cancelled going in. We had to catch the train going back on the other side. Panic.

My Edinburgh Punk Rock history lesson was thwarted! Yes, it was really 4 years after the scene was really happening, but I still wanted to see the streets and venues these kids went through and fought in. I wanted to get in the record shops!

So after the insanity of trying to cram in on the return train on the other side, with no room for me, I found myself sitting on my case on the platform. A young station master strolls up and I asks when the next train will be. There is no next train, not for a few days maybe. Devastation. The Station Master says, ” I’ll call the Missus.” Apparently everything is solved with calling the Missus in the UK. The man came out and said his wife insisted that I stay with them. I was a bit worried as I didn’t know this person, but he was in uniform and looked very worried about my well being. So I was given my Tae and got on so well with their young child, that I was asked if I had baby sitting experience and sat for them while they went round the pub. The Missus wrote to my Ma to tell her I was alive. Sadly, I had to go back down to London and couldn’t get to Edinburgh after all of the trouble I had been through.

This year, a fabulous adventure of a exhibition featuring Scottish Punk and Post Punk music is going on at the National Museum in Edinburgh, Rip It UP! I cannot travel this year, but if you are, take it all in. Tell us how it is.

Got any great stories from 1976 to 1990 about your travels and experiences in the UK and Ireland music scenes? I would love to hear them. If you know any great Punk and Post Punk bloggers/blogs, give me a line. I would love to feature stories here. Got rare 45 and album poster art to share, send it to me, all credits will be made.

Rip It Up Exhibition at the Scottish National Museum