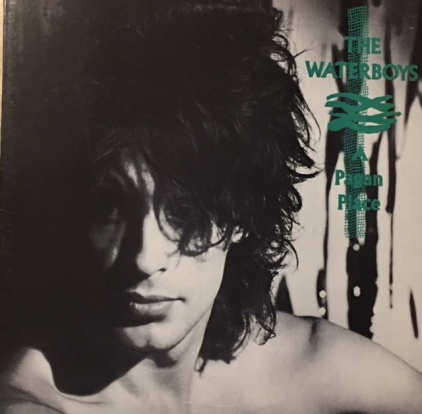 I’m barreling up to San Francisco with some concert going friends. I wouldn’t say they were close friends, but a group of kids that managed to get to rock and punk shows in the SF Bay Area together. We were packed in the car, too many of us. They were talking about getting there by the time U2 gets on. It’s December 1984, and U2 is making it big. It was not assigned seating for the tickets we could get and that point it didn’t matter. I start talking about wanting to make it before the opening act starts. The others commented, “Who cares about the warm up band?” I did, it wasn’t  just any warm up band. It was a band I had been waiting for, a Scottish and Irish band called The Waterboys. The show was U2 at the San Francisco Civic Auditorium. Always a bad band venue, standing room only affair, and getting in and through the doors was usually akin to a cattle chute. I was determined to find somewhere I could dance and sing along, so we muscled in.

This was California. We weren’t the East Coast, where the record stores got the imports first. If a band wasn’t big enough yet or had not signed with a big American label, it was hell to find the vinyl. Growing up on the Left Coast of the US, you would have a rough time getting decent music choices for the fresh new music coming out of the UK. It was like fashion, it took a while to filter in and bands were up against the great American Music Machine. The new music was taking a while to hit our coast.

Music was changing again, and I was too. I was still just a kid, however I was finding I really wanted more out of music than what was being offered on AM Radio and FM commercial Alternative Rock. I knew there had to be more musicians and acts that were just not breaking the American music bubble. So I spent late nights listening to college radio stations where you could hear world music. I made cassettes of shows featuring British and Irish bands, because finding vinyl imports for the upcoming Irish and Scots bands was extremely difficult, unless you had a connection at one of the local record shops. I would make lists of song titles and album names from the DJ, and listen to someone who really liked to explore the new music and took our phone calls. Music magazines were often a great resource, but coming from the UK they were hard to find, and usually very out of date. Not that that mattered, because by the time the bands toured, it would be relevant and fresh. Strange how we lived without the Internet for so long.

One of the DJs would play Celtic Trad as well as the rock and pop coming from these countries. This was my first exposure to U2, The Alarm, The Cult, and many other bands. I heard The Waterboys one night after reviewing the tapes that I would set up and leave recording as the shows were usually on in the wee hours. The album was called A Pagan Place, and the few songs played off of the album had me hooked. Scott’s voice was a unique pitch, the lyrics really spoke, and the sound was very different. I then began the hunt for their elusive LP. It proved to be a futile endeavor and I was not to find the album until after the show. However, in the process, I did find out about U2 touring and as luck would have it, they would have The Waterboys as their opening act.

My concert friends and I made it in the venue about 15 minutes before The Waterboys came on. It was packed and insane, and I could not get a great view, despite the fact that the lead singer and songwriter, Mike Scott, was fairly tall. I finally found a place to stand where I could make a space to just listen. My friends were complaining, and I said, “Just give it a chance.” So I kept them in sight and knew where the car was parked if we parted ways. I heard that unique sound that is the Waterboys and what was called The Big Music. There was a song titled, “The Big Music”, but the thrust of the sound was what was big, that you could really feel it. Songs came like “The Earth Only Endures” and started bringing out this amazing feeling, a light was going on in and around me. It didn’t matter how dark the auditorium was, there was a light that wasn’t the stage lighting. It was in Scott’s voice and lyrics, the amazing fiddle, and everything else being felt by the sound the band created. The lyrics were fantastic, real feeling stories about the mystical and the amazing landscapes of people and places. I was elated. I doubt my friends got it, they were too U2 centric. I didn’t care. It would be a few months before I could finally get the album and I wore out the tapes I had made by that time.

Life takes you along and while I have listened to the many incarnations of The Waterboys over the over 30 years they have been performing, I started really listening to them again over the last two years as part of one of the life re-evaluations I have had. When you look back on a section of years and how your life is and what you want it to be. Your youth and how you have changed. What made you what you are. That was what music did for this shy teen that is still inside me. It was the music that helped me to grow as I became an adult, if in body only. For really we are still all children on magical music journeys.  And somewhere, there has to be that light, that big connection, that Big Music feeling.

Adventures of a Waterboy 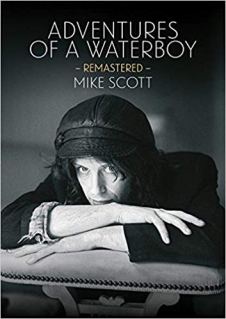 Mike Scott has written an exceptional memoir about life as a Waterboy.  I grabbed the second edition called Adventures of a Waterboy: Remastered. After reading the first chapter, I was taken on a rollicking Rock journey. I had to limit my reading to two chapters a night, I just devoured the thing. The detail and feel of each chapter’s theme was consuming. Scott really opens up as a musician and shows us amazing snapshots of the history of the punk and post punk years in the late seventies and early eighties in the UK. He gives us great details about the music that influenced him and his peers. What the music scene was like with someone sailing through it and somehow surviving it. The recording labels, the music industry itself, and the creativity and drive of the music in his head and how to make sure the message got out, with integrity, in a fight against the controls of the music labels and Faustian commercialism that followed. Then of course there were the people who managed, or tried to control him and the band, and how the hero fought that battle. His writing makes you feel like you were right there with him in the room and had met every musician he had met and worked with. The tales are strongly written and absorbing. I recommend it for a great biography read.

Twenty minutes after finishing this article, I walked into a local vinyl shop and found a copy of A Pagan Place. That elusive album that took so long to find the first time in 1984. Sadly it’s not the original copy of the album on if I remember right was Island or Ensign, and would have been worth quite a bit more if it was. But I have it on vinyl again, that’s what matters.

You can catch up with The Waterboys on their website and Twitter. If you are traveling to Europe this summer, they are playing several dates. You can find their tour information here:

One thought on “The Waterboys, a Light that Still Reaches”